Touched with Fire stars Katie Holmes and Luke Kirby as two poets with bipolar disorder whose art is fueled by their emotional extremes. When they meet in a treatment facility, their chemistry is instant and intense driving each other’s mania to new heights. They pursue their passion which breaks outside the bounds of sanity, swinging them from fantastical highs to tormented lows until they ultimately must choose between sanity and love.

Enlightened Tibetan masters return as recognized “tulkus” – reincarnated buddhas. In the 1970s, tulkus began to be born in the West, confusing both the Tibetan system and the lives of the Western children involved.

Disillusioned with the tedium of his existence, psychiatrist Hector (Simon Pegg) confesses to his girlfriend (Rosamund Pike) that he feels he is a fraud for dispensing recommendations to patients who never seem to improve or get any happier. He considers breaking out of his lackluster routine. Summoning up some courage, Hector gives his starved curiosity free rein and embarks on an international quest to find the right formula to bring him joy and vitality. 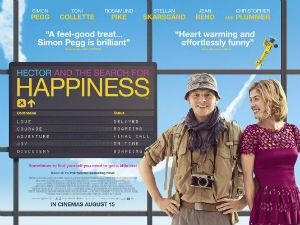 Noble was born in Dublin, Ireland. Her father was an abusive alcoholic and her mother died when she was ten. She was sent to an orphanage, and dishonestly told that her three siblings were dead. She escaped and lived rough in Dublin, where she was gang-raped. Her baby son was forcibly adopted, against her will. She married and had three children, but was the victim of domestic abuse.

She visited Vietnam to care for abused and abandoned children after a recurring dream (during the Vietnam War) about them appealing for her help.

If you could talk to the child that you used to be, what advice would you give him?

That question forms the basis of this comic fantasy. Forty-year-old Russ Duritz (Bruce Willis) is a wealthy and powerful “image consultant” who has made a career out of telling people how to present themselves. But while he’s a success in business, he’s a failure in life; he’s vain, mean-spirited, and hasn’t been able to hold onto a marriage (or even a pet dog). One day, Russ is startled to meet Rusty (Spencer Breslin), a stocky kid whom he soon realizes is himself at the age of eight, having passed through a wrinkle in time. Young Rusty doesn’t seem much happier than the grown-up Russ, so the older man takes his younger self under his wing and tries to teach him how to avoid the mistakes he’s made, while Rusty encourages Russ to be a more caring human being. Along the way, Russ and Rusty become friends, and realize how much they can learn from each other.

Director Jean-Marc Vallée (Dallas Buyers Club) helms this self-discovery drama starring Reese Witherspoon as Cheryl Strayed, a woman who takes it upon herself to hike solo across 1800kms after a string of mistakes pull her life down close to ruins. Based on Strayed’s bestselling memoir.